It’s been a while since I last got to work with a Linux cluster, so I decided to build an affordable cluster of raspberry Pi computers. It took an entire afternoon to build! The cluster had 16 cores, 4gb of ram, 128gb of storage, a whopping 16 usb ports and only cost about $200. How many clusters do you know with 16 usb ports? 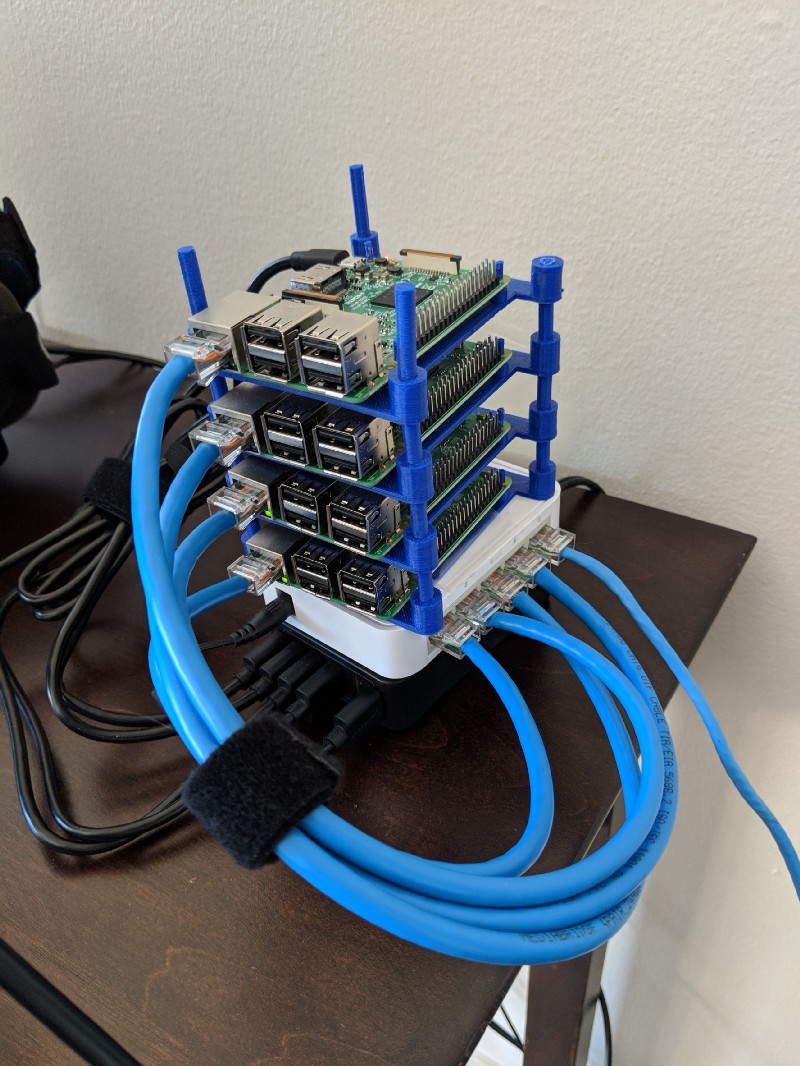 I decided to set up my cluster for monitoring my computers using Telegraf to report statistics like CPU and Memory usage. Some more awesome stuff you could do with your very own high performance cluster:

Getting the hardware done was easy, the tricky part was automating all the software. I experimented with a few configuration management tools, and found that Ansible works pretty great on the Raspberry Pi. It’s easy to setup and uses very little memory, unlike other tools that would want to pull an entire JRE and use at least 512mb of ram (whyyyy). Another advantage for ansible is it does not require an agent to run on each node, as it works entirely over SSH.

Of course, for a scalable cluster, you don’t want to care about what node work is getting assigned to. Who wants to spend their time figuring out memory requirements and scheduling jobs on different nodes? I wanted to run Grafana and InfluxDB on the cluster, and to not worry about what node has what programs and libraries installed. Docker containers make this easy by packaging up an entire service into a single container that can be assigned to any node. Docker Swarm can orchestrate running your containers across a cluster. Sharing files between nodes is also tricky, so I set up GlusterFS to share storage across the entire cluster.

If you want to follow along and build one yourself, this guide assumes you are familiar with Linux and using a Raspberry Pi.

I happened to have the tools to make ethernet cables already, so I crimped custom length cables for the project. 3D printed parts were printed in Blue ABS on my Makerfarm Prusa i3.

Investing in some Ethernet crimping tools and learning how to cut your own cables is worth it, having perfect length cables and being able to replace broken connectors (like if the tab on the top breaks) is very handy.

If you don’t have a 3D printer, look to see if a nearby hackerspace or your local library has one that could print the cases for you. There are many stackable cases on thingiverse you can choose from. Or you could just build a self replicating reprap, it’s not that hard and having your own printer is pretty awesome. You could print cool things like Gameboys, Spaceships, a whole lot of spaceships, jesus that’s a lot of spaceships.

I started by testing all the parts together. I crimped a couple of short 1 ft ethernet cables to connect each pi to the switch. Then I installed Raspbian on 4 sd cards and inserted them into each pi, and powered them all from the USB charger. I checked the status page on my OpenWRT router and verified that each pi got an IP and that I could log into each one as the pi user. Assuming nothing releases magic smoke, you are probably good. If magic smoke is released, you have done something wrong and should go back to step 1. If all the lights blink, you are most likely good. If you can SSH into each Pi, things are definitely working.

Once I knew all the hardware worked, I picked a random stackable pi case on thingiverse and started printing 4 of them. Printing cases can take a while, so you can start to tinker with the software during this time. I used blue plastic because that’s what I happened to have in the printer at the time, and was too lazy to change it. 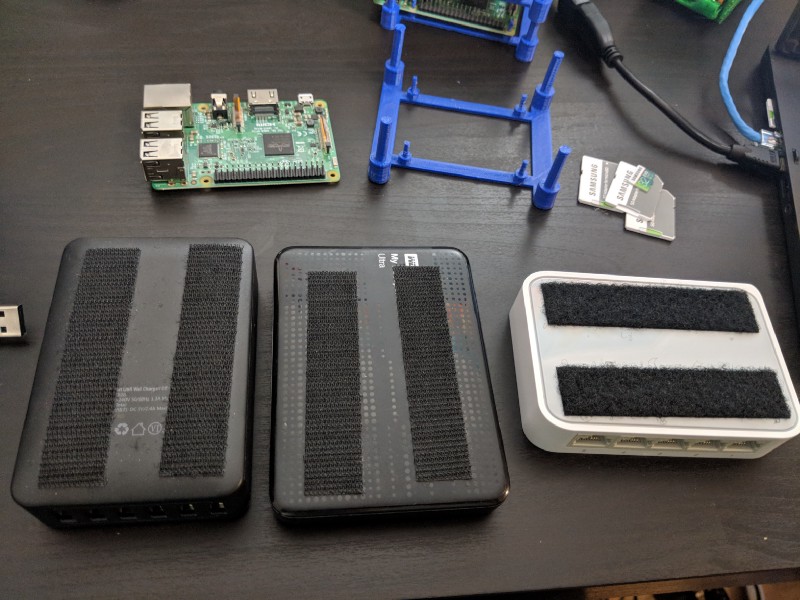 I applied 2 rows of sticky velcro to the power supply and to the network switch. Optionally, you can put opposite velcro on each side of a hard drive, and sandwich it between the switch and the power supply. I would not recommend eating this sandwich though. Then I taped one of the stackable pi cases to the top of the switch. I had to borrow the hard drive from this project to store hundreds of gigs of 5k 360 photos and videos of Iceland, so I’m not currently using it. However if you do have an external drive, you could configure the head node as a NFS server to share the disk to the cluster instead of running glusterfs. 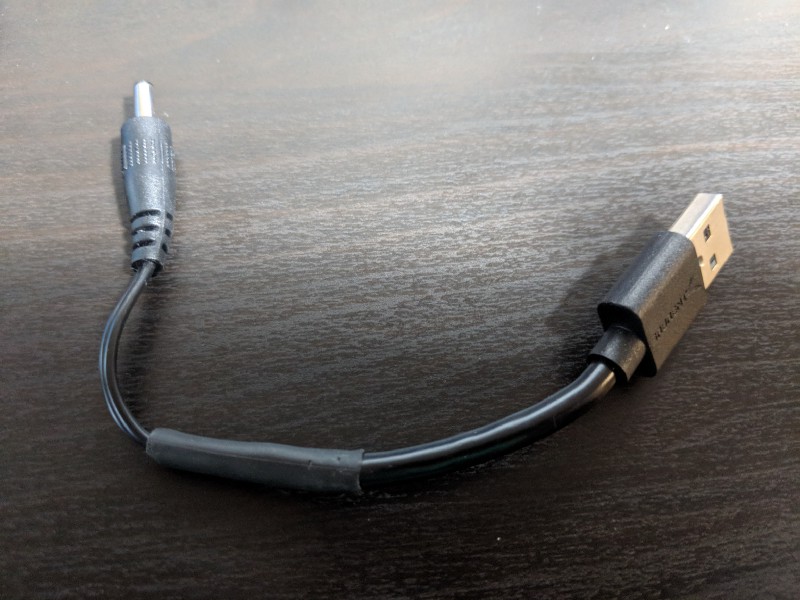 I wanted to use only one power cable for the entire cluster, so I chose a low power 5V switch that I could modify to run on USB. I cut the power cable for the switch along with one of the USB cables and spliced the ground and power lines together. Do not wire the data lines (they do not like power). If magic smoke is released when using the expertly crafted adapter, go back to step 1. 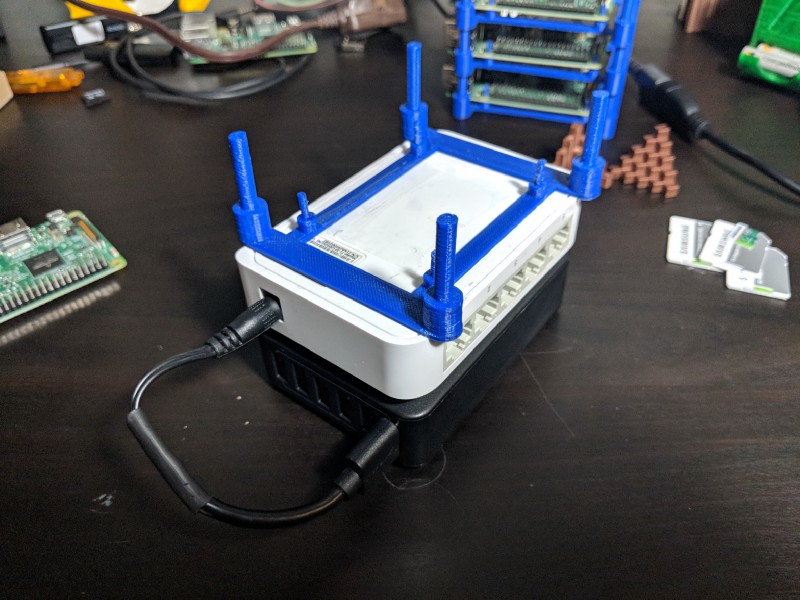 Once all the cases were printed, I installed a pi on each case and stacked them up. Using some velcro wrap to keep the cables organized (because we are classy and put some effort into cable organization), I connected everything together. I used the 1ft usb cables for the bottom 2 pi’s and 3ft cables for the top 2.

There are a few options for networking. The Raspberry Pi 3 has both an ethernet port and wifi as options for connectivity. I connected the switch for my cluster directly to my main network with a crossover cable. Another way could be running the head node as a network gateway and having it connect to your main network with a usb ethernet adapter or through wifi. There are many fancy ways you could do networking, that’s left as an exercise to the reader (I guess if you enjoy debugging networks or something).

Prepare the micro SD cards with Raspbian stretch (I went with lite), and set up each pi one at a time. These are the very boring manual steps for getting everything ready to be automated by Ansible.

If you got this far, it’s good to see you didn’t get trapped inside of vim when editing the hostname file. On the head node, you can pull down my git repo of ansible scripts to automate the rest of this setup

edit hosts.yml with the hostname of the head node and worker nodes, along with any other computers you want to manage. I included my desktop (burtgang) so that the cluster could setup and configure telegraf on it.

dirnmngr is required for adding the PPA key for the Ansible repo, you can install it with apt install -y dirnmngr. Then you can install the latest version of Ansible by following the debian instructions: https://docs.ansible.com/ansible/latest/installation_guide/intro_installation.html#latest-releases-via-apt-debian From this step forward, all the hard bits are automated!

running ansible-playbook all-playbooks/hosts.yml will make sure that each node has the hostname for other nodes configured on the current network if your router doesn’t let you connect directly by hostname.

running ansible-playbook cluster-playbooks/glusterfs.yml will setup glusterfs across all nodes and mount it at /mnt/gluster. You can chown it to the pi user with sudo chown pi.pi /mnt/gluster to make it accessible.

running ansible-playbook cluster-playbooks/docker.yml will setup docker swarm across the entire cluster. To use docker, you will need to add the pi user to the docker group with sudo gpasswd -a pi docker. After adding pi to the group, you need log out and then log back in.

Running docker stack deploy -c ./docker-compose.yml pi-services will deploy the containers defined in the compose file to the cluster swarm. Running docker stack ps pi-services will check the current status of the deployment. You can then access grafana by browsing to any cluster node on the port 3000. If you have issues, you can run the services locally with docker-compose up and looking at the log output. 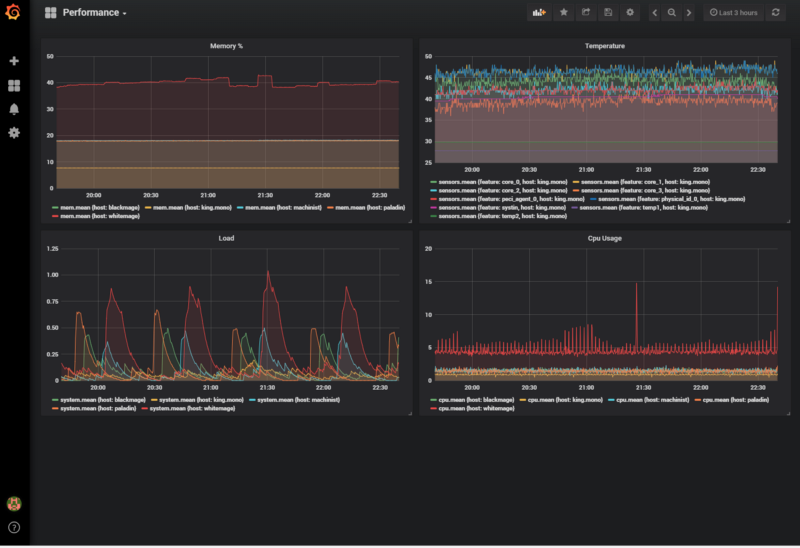 If you would like to use the cluster to monitor devices on your network with Telegraf, you can runansible-playbook all-playbooks/telegraf.yml. The playbook will install Telegraf on every machine in hosts.yml, and configure Telegraf to report back to the cluster. Additional hosts on your network that you want to control with Ansible will have to be added to hosts.yml and setup for ssh. Telegraf is defined by a role in roles/telegraf, and can be automatically installed on armhf or x86 hosts. There are telegraf ansible scripts on ansible galaxy, but I’m not sure if they support arm so I just made my own. Why use someone else’s code when you can invent everything yourself!

What to Do Next

You can use your own armhf compatible docker compose file to deploy any services to the Raspberry Pi swarm. The compose file I setup has only 2 services, so half the cluster isn’t utilized yet.

Additional cooling may be desired for true high performance computations. Setting it up with a usb powered fan helps, but I’m sure this could be better with some additional RGB lighting. 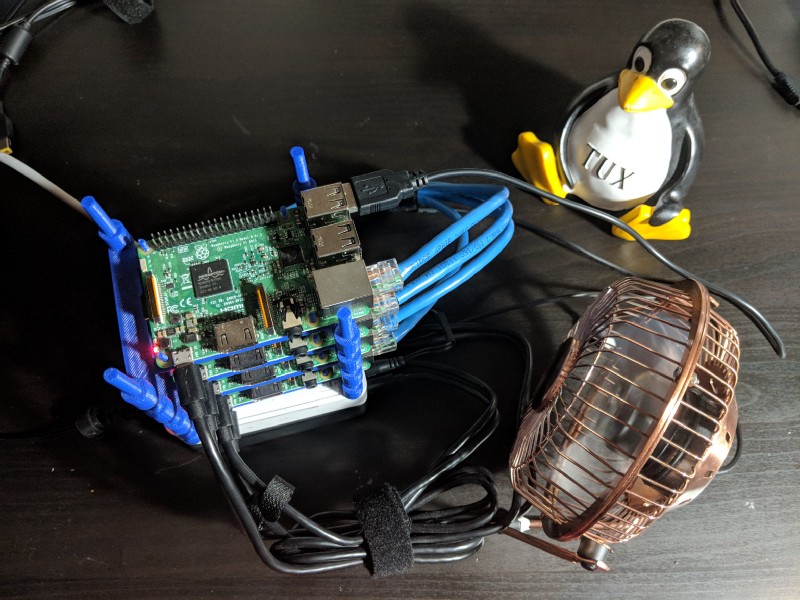 Thanks to the team at InfluxData, I got to give a presentation about my cluster!

(As an Amazon Associate I earn from qualifying purchases.)